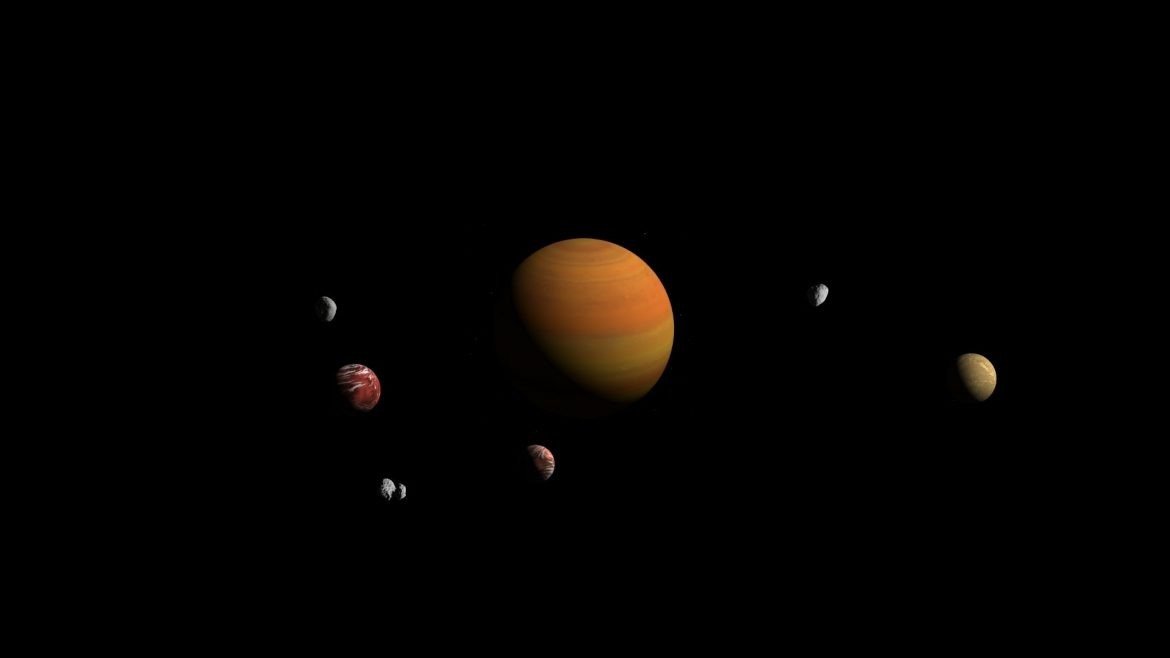 Have you ever wondered why Jupiter and Saturn have tens of moons while Venus and Mercury have none? To answer this question, we must understand how planets get natural satellites. Let’s find out.

This is how satellites get into orbit of another planet. If an object has a sufficiently small relative velocity to a planet (under its escape velocity), the planet is able to capture the object into an orbit, forming a natural satellite. Some of them may even reside in stable orbits.

If it does not slow down enough, it will pass right through the planet’s gravitational field, and that orbit insertion becomes a gravity assist that will change its orbit around the star.

Moons with weird orbits, such as highly eccentric, inclined, and retrograde orbits, may be evidence that it’s captured. If a satellite is formed with the planet, it will be in a tidy, prograde, and equatorial orbit.

This method of acquiring moons is more like forming planets in the Solar System. When a star forms, there is a disk near it to form planets. That works the same way but on a different level.

When the planetary materials clump together, gravity attracts nearby materials to form the planet and causes some planetesimals to orbit the planet. Therefore, the satellites form using accretion, which is the process used to create planets out of dust and particles. When these particles collide together, they occasionally stick together to form one particle. After that, the particles crash into others nearby until a small group of particles becomes a world.

At that point, the circular moons are like planets, while the irregular ones are like asteroids. That’s probably how large planets like massive gas giants obtain some moons in a tidy equatorial orbit around the planet.

Lastly, debris from colossal planetary impacts can be accelerated enough that it enters orbit around the planet. In fact, that’s probably how Earth got its moon. In this case, a Mars-size planet and the young Earth collided, shattering debris around Earth’s orbit. The pieces then accumulated, forming the Moon.

Why Don’t Mercury and Venus have Moons?

Then, there is a strange phenomenon: The lack of moons of Mercury and Venus. The two planets can get natural satellites by any of the three methods, right? However, we didn’t find one orbiting Mercury and Venus!

The main reason for Mercury’s lack of moons is that its Hill Sphere (the area in which an object can capture a satellite) is too small. It is too light, having only one-eighteenth of Earth’s mass. Moreover, it’s the closest planet to the Sun, with an average of only 0.4 astronomical units from the Sun. These two factors cause the Hill Sphere of Mercury to be too small, leaving too little margin for any moon to be in a stable orbit for a very long time.

However, the case for Venus is a bit complicated. It is much further from the Sun than Mercury, and it has a similar size to Earth. Therefore, there must be other factors that can explain the fact that Venus has no moons despite its ability to capture satellites.

The Moon is slowly drifting away from Earth. It’s because of the tidal forces created by the difference between the rotation of Earth and the orbital period of the Moon. That works the same way on Venus but on a much larger scale. That’s due to Venus’s slow and reversed rotation. Then, instead of drifting away, the moons of Venus get closer to the planet over time, and the moon and the planet will crash into each other eventually. Therefore, Venus also has a tough time catching moons with stable orbits despite its size and distance to the Sun.

So, we’ve talked about 3 ways for a planet to get natural satellites and why the inner two planets are moonless. To learn more about moons, please visit the sites in the references below.

Mission Success: The First Flight of the Mars Helicopter is Successful!

How Does A Transfer Orbit Work (and How to Reach It)?

Neutron Stars — One of the Craziest Objects...